Posted on November 6, 2016 by scottlonglovestotravel

You can’t do New York City in a day. Or a week. Probably not even a month. But all I had was about eight hours. Since I’ve been to the Big Apple a gazillion times, admittedly my challenge wasn’t as steep as it sounds. Statue of Liberty? Done it. Ellis Island? Same. Central Park? Yeah, that, too. Rockefeller Center? Of course. Yankee Stadium? It’s New York, isn’t it?

No, this trip was about digging deeper into what New York has to offer a museum and pop culture geek like me. And I’m pretty sure no matter how deep you dig in NYC, you’ll never stop finding cool stuff to see and do.

I woke up early and hit up Google to plan my day. Through a variety of sources, I came up with a list of about half-dozen places to hit. I put them all in Google Maps to figure out the most efficient path to take, and then I got ready to set out. But wait! For some odd reason, I lingered a little longer on the United Nations website than normal, and realized that I needed to buy my ticket in advance. And, for yet anther odd reason, just as I was about click “buy,” I noticed that warning to be sure to arrive plenty early to clear security. I bought a much later ticket, and was reminded that merely having a list of places to go and hours of operation isn’t enough. You have to make sure you know the policies, too.

I was crashing with good friends who live in Brooklyn, and since I’ll probably be on the subway quite a bit today, why not walk across the Brooklyn Bridge? Great plan … except for the rain. So two pieces of advice: 1. Pick a sunny day and 2. Pick a day when you’re not in a rush, because no one else on that bridge will be walking across it. They’ll be strolling. And that means they’ll be annoying you. (I have places to see and things to do, folks!)

OK, you got me. This wasn’t a new stop for me. But with all the ballyhoo over “Hamilton” on Broadway, I wanted to swing by and pay my respects again to the founder of our country’s monetary system. But fun fact about my first visit: I just lucked into finding it. I was meeting a friend for lunch in the Financial District, and simply walked past this church and cemetery. It seemed odd to me that a cemetery was almost in the middle of Wall Street, so I poked my head in … and there was Alexander Hamilton! This is why I prefer to walk in cities – you don’t accidentally bump into awesomeness on  the subway or in an Uber.

After a quick visit to Ground Zero to pay my respects, I hopped on the subway to get to what I expected would be my highlight of the day – the United Nations tour! First tip: There’s not a convenient subway stop. You’ll THINK there is, but once you get off in Grand Central Station, you’ll realize how big it is. And that you’re probably walking the wrong way. Which I was. Oops!

Winded and out of breath, I arrived at the UN, cutting it real close to having enough time to get through security in order to not miss my tour. Here’s the process: You wait in a very long line across the street. This is just to get signed in. After you’re signed in, then you make your way across the street and wait in yet another long line to go through security. I was panicked, but the whole process lasted about an hour and I actually had time to relax in the lobby before my tour.

Being a government geek, I loved every bit of this tour. Security Council Chamber? Are you kidding me? The General Assembly? Please and thank you! I got lucky and there were no meeting that day, so our tour was able to visit everything. 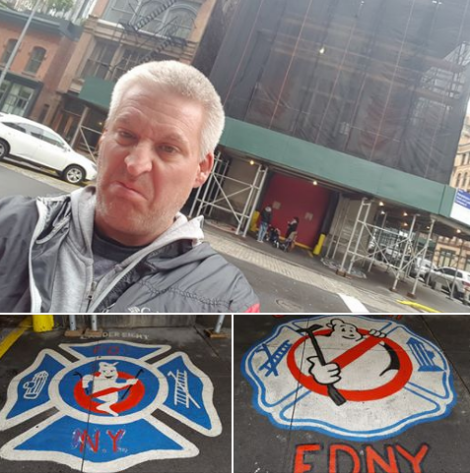 Enough with history. Now it was time to feed by pop culture soul!

I was in sixth grade when “Ghostbusters” came out. I remember listing it as my favorite movie even before I saw it. And, now a whole new generation of movie-goers were being introduced to it through this summer’s reboot. Turns out, the fire station featured in the original was in Lower Manhattan.

I turned the corner and …. found out that it was being renovated. Who you gonna call when scaffolding ruins your selfie?