One-day roadtrip in the Northeast

Posted on November 4, 2016 by scottlonglovestotravel

Never before have I had such difficulty filling a travel day. Usually, my problem is trying to cram too many things in too few hours. But when I sat down to figure out the best way to catch as many sights as I could from Connecticut to Boston Logan, I quickly learned that there’s a museum “season” in the Northeast.

I combed my normal sources of museums, historical sights and pop-culture locations. I found plenty to choose from. But when I dug a little deeper, I found that almost all of them – literally, almost all of them – weren’t open in April. I guess this is what you get when you live in Florida – you forget how awful the weather can get in other places of our great country.

But in the end, I was able to put together a pretty fascinating day on the road, and ended up some places I never would have gone … but I’m glad I did.

I left Mohegan Sun in Uncasville, Connecticut, early in the morning. The historic seaport of Mystic, Connecticut, was a short drive away. I was drawn here to see Mystic Pizza, made famous by the movie of my youth, but found that I really should have planned a day here. So much to see! And, sadly, too early in the day for a slice of pie.

My next stop was Newport, Rhode Island, to see the Vanderbilt family’s famous mansion known as The Breakers. I’m sure most make the trek to Newport to gawk at the immense wealth on display here in mansion after mansion. Wealth doesn’t necessarily excite me, but I do enjoy touring famous homes – any famous home – because I find myself imagining living there myself in that time. And that’s almost always an awkward exercise, especially older homes, because it’s tough to imagine not having some of the things that we take for granted these days. But I really struggled with The Breakers. It’s opulent, no doubt, as all Gilded Age mansions are. Gaudy, even. But what I struggled with was how “cold” the mansion felt. Even though lots of people had lived there, I didn’t get a sense that it had ever been “lived” in. Of particular note was an enclosed balcony on the back, overlooking the water. My audio guide told me it was a popular place for the Vanderbilts to relax. But there was nothing relaxing about it. It left me curious how a family that could afford to buy anything could find solace in such an uncomfortable place. 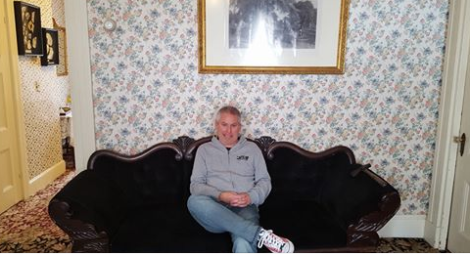 Next was the surprise of the day – a stop in Fall River, Massachusetts, to see one of those “notorious” sites – the house where the murders that Lizzie Borden was accused of committing took place. I knew almost nothing about this case before pulling up to the museum. By the time I left, I felt like an expert. THAT’S a sign of a great tour.

I was also lucky to get a private tour, which I love because I can ask all the questions I want without annoying my fellow tour participants, who almost always are not as excited as I am to be on the tour. But I barely had a chance to ask questions on this tour, as the guide fired off facts left and right. My favorite part? As soon as we made it into the room where Lizzie’s father met his maker, my tour guide grabbed my phone, told me to sit on the couch and he snapped a few photos. Now, it’s not THE couch Mr. Borden was axed to death on, but it is a reproduction and in the same spot as it was on that fateful day. Those who are not enamored of macabre might not have had the same reaction as I did, but I’ve been on a ton of tours where you are constantly reminded not to touch anything, to not  take any photos. And here I was with my tour guide not only encouraging both, but actively participating in doing so

As good of the tour is, I find it fascinating that it’s a working bed & breakfast. And, yes, you can book the room where one of the murders happened. In fact, it’s the most expensive because it’s the most popular. Or, you can opt to rent the entire house for your group, and they’ll conduct a seance. Maybe then you can find out what no one has yet – who really committed the murders? 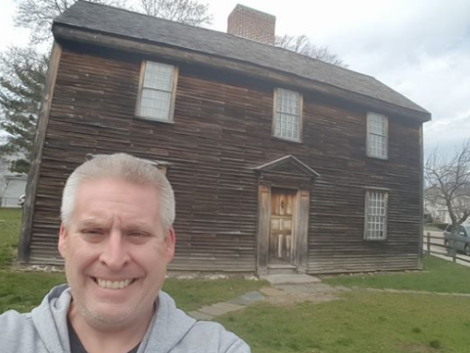 My final stop on this road trip was Quincy, Massachusetts, where Presidents John Adams and John Quincy Adams were born and where their bodies now lie. Unfortunately, it wasn’t the “season” for tours of the birthplace (seriously, folks, history doesn’t have “seasons!”), so I knew the best I could do is walk the grounds and peer in a window or two. So that’s what I did. Someday I’ll get back in “season” and get inside.

My final stop was just up the street from the Adams’ birth house. The cemetery across the street, the original place where the Adams were interred, is full of history. But as I wandered from tombstone to tombstone, I was still angry that so many amazing historical places I wanted to go to this trip were closed – including the church where the Adams family is now entombed.

So I walked across the street to “The Church of the Presidents,” as it’s known, and soaked up a little history. Not only were tours not scheduled to be offered for another couple of weeks, but the sign on the door indicated the church itself, where services are still held, was closed. I’m not really sure why I did it, but I’m sure it was just my frustration bubbling up, but I gave the door handle a little jiggle. To my surprise, it opened and I walked inside.

Once inside, I noticed a few people were there. One walked toward me and asked if he could help me. In my best “pretty please” voice, I told him that I knew they weren’t doing tours, but I was from Florida and not sure when I’d make it back, and whether there was any way he’d let me walk down into the tombs to pay my respects to two of our earliest presidents. Turns out, he was the director of operations, and not only said, “sure!” but also ended up giving me a mini-tour of the church.

I got to see the Adams’ family pews and to imagine them worshipping there on a Sunday long ago. We then made our way to the basement. I really wasn’t prepared for how powerful this would be. The four graves were as stately as they could be, flags draped over them. It was an incredibly peaceful place. I probably would have just sat there for a while, if it I hadn’t felt blessed to even be there and not wanting to inconvenience my gracious host any more than I already had.

The lesson I learned? Even if the sign says “closed,” always try the door. You never know what it might open.

One thought on “One-day roadtrip in the Northeast”